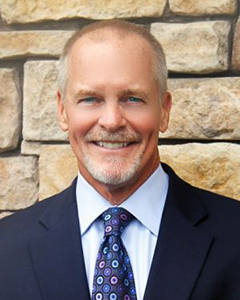 Local business owner and civic leader, Chuck Kempton, has been named the 2018 recipient of the Distinguished Alumni Award. Chuck is a 1978 graduate of Smith-Cotton High School. Following high school he worked at local businesses in Sedalia until he joined the family business, Dugan Paints, in 1981 as a clerk, one of the three employees in the business. He began travelling to the Lake of the Ozarks pursuing long-term clientele while selling merchandise out of a van and evaluating the potential business opportunity in the lake area. He coordinated the design and development of a new store in Laurie, Missouri, driving from Sedalia to the lake six days a week to run the new operation. He then began exploring the potential of a store in Osage Beach, Missouri, which he opened in 1992. In 1997 Dugan’s purchased a paint store In Warrensburg and re-located the Sedalia store from 16th Street to Erika Ave. He was then general manager of four stores and three warehouses.

Since becoming sole owner of the business in 2000, he has expanded into floor coverings, renaming the business Dugan’s Paint & Flooring Center, and has grown from primarily a local paint store to an area leader in the paint, window treatment, and floor covering industry employing 50 people. One nominator wrote of Chuck’s business strategy, “Chuck Kempton’s belief that his customers deserve a quality product and impeccable service is a driving force behind his desire for all employees to know the products and how to serve people.”

Chuck is a member of the Painting and Decorating Retailer’s Association, the Lake of the Ozarks Builder’s Association and All Pro Buying Group, of which he has been director since 2015. For more than 35 years he has been a leader in Sedalia’s community and economic development. He has served as a member of the board, executive committee, and as president of the Sedalia Chamber of Commerce. For 10 years he was the committee chair for the Chamber golf tournament. Chuck was involved in the formative years of creating the Sedalia Convention & Visitors Bureau and has remained actively involved in its growth. Since 2000 he has served on the Sedalia Area Tourism Commission where his leadership as president resulted in a streamlined process to collect and distribute lodgings tax revenue. He has been a longstanding stakeholder in the Sedalia Heritage Foundation’s mission to maintain and enhance the Historic Katy Depot. His generous support includes their recent project of the relocation and repurposing of the MoPac Caboose from the fairgrounds to Katy Depot.

He has been a sponsor of local athletic teams, including the Sedalia Bombers baseball team. He has quietly made a number of donations to organizations within the Sedalia School District and State Fair Community College. He has helped with new carpet at Liberty Center and provided art supplies to public and private local schools. Chuck was described by his nominators as professional, kind and generous, “He is a dynamic worker who will go the extra mile on all projects. There is not a project or task that Mr. Kempton cannot complete. He is the definition of an enterprising person—look at Dugan’s Paint & Flooring business. More importantly, he gives back in so many ways and does so quietly. He is a hidden gem!”