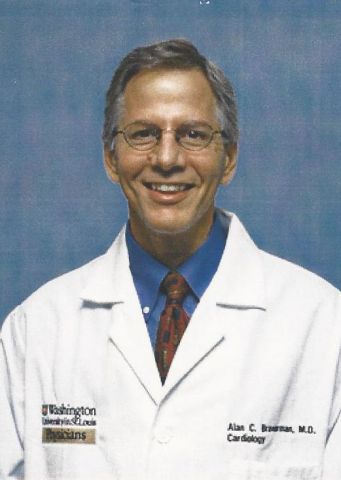 The Sedalia School District Foundation has named Alan Braverman, M.D. as the 2014 Distinguished Alumni. Alan Braverman graduated in 1979 as the valedictorian of Smith-Cotton High School, where he was a pivotal member of the varsity soccer team, as well as captain of the swim and golf teams. He played trumpet in the marching, jazz and pep bands and also performed in several high school theater productions.

Dr. Braverman graduated with Distinction from the University of Missouri-Kansas City in 1984 with a B.A. in Biology. In 1985 he earned his M.D. from the University of Missouri-Kansas City School of Medicine. He completed a residency in Internal Medicine at Brigham and Women’s Hospital and Harvard Medical School and also served as Chief Medical Resident. Dr. Braverman also completed cardiology fellowship training at Brigham and Women’s Hospital.

In 1991, Dr. Braverman joined the faculty at Washington University School of Medicine in St. Louis, MO, where he is currently the Alumni Endowed Professor in Cardiovascular Diseases and Professor of Medicine. He is actively involved in the education of students, house staff and fellows at Washington University and serves as Director of the Inpatient Cardiology Firm at Barnes-Jewish Hospital. He has been awarded Teacher of the Year by the Internal Medicine Residents on four occasions and the Clinical Teacher of the Year Award by the Washington University Medical Students Class of 2004. In 2011, Dr. Braverman received the E. Grey Dimond, M.D. Take Wing Award from the University of Missouri-Kansas City.

He is a Clinical Cardiologist and has a particular interest in diseases of the aorta and Marfan syndrome and related disorders. He is the Director of the Marfan Syndrome Clinic at Washington University in St. Louis, serves on the Professional Advisory Board of the National Marfan Foundation and is actively involved in clinical research in Marfan syndrome and aortic diseases.

Dr. Braverman’s passion for work on Marfan syndrome is not without personal interest. His father, an orthopedic surgeon, did not know he had Marfan syndrome and died at the age of 46 of a ruptured aorta. All five of Dr. Alan Braverman’s siblings were tested and only one had inherited the disorder. His brother, David, has had two operations to replace a weakened part of the aorta enabling him to live a normal life.

Dr. Braverman serves as co-host of the Heartworks St. Louis Gala with his wife Rebecca. Heartworks St. Louis honors the work of pioneering surgeons and raises funds to support the National Marfan Foundation’s mission to fund research and treatment of Marfan syndrome, provide education to the medical community, enhance awareness and diagnosis, and to offer support to those living with Marfan syndrome for the highest possible quality of life.