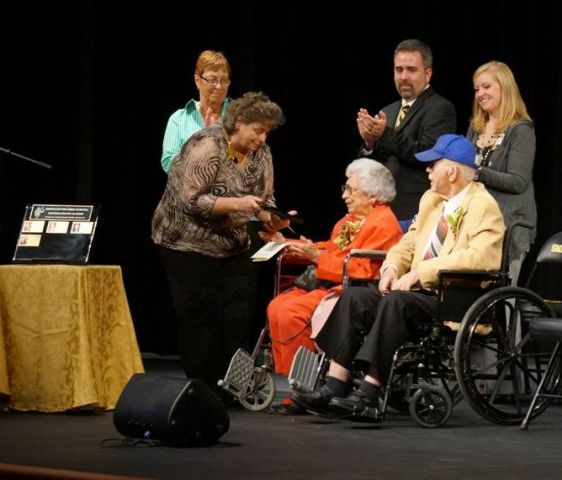 Donald and Edith Donath spent their lives doing almost everything as a couple. It would be difficult to acknowledge one spouse’s accomplishments without recognizing the involvement of the other.

She taught music in the Sedalia School District from 1953 to 1986 at Whittier and Washingtion Elementary schools as well as sixth grade music at Sedalia Middle School. Mrs. Donath has played violin with the Sedalia Symphony for over 75 years.

Edith and Donald W. Donath were married in 1947. During that year she was teaching at the Bothwell Rural School. John Bothwell had left instructions that the teacher of the school should be a “married person” and provided a small home, the “Teacherage,” adjacent to the school for the teacher and spouse to live in. Mrs. Donath describes it as their “honeymoon house.”

Mr. Donath withdrew from Smith-Cotton High School on December 12, 1941 to enlist in the military. With the assistance of Janet (Moriss) Sloan the appropriate paperwork was completed for Mr. Donath to receive his honorary high school diploma for Missouri veterans. On June 25, 2013 he received his diploma from the Missouri Department of Elementary and Secondary Education and the Missouri Veterans Commission.

Mr. Donath served in the Army as Staff Sergeant 20th Armored Division. He completed his service as a tank commander in the 20th Tank Battalion of Patton’s Third Army.  He returned to Sedalia in 1946 and apprenticed at the Missouri Pacific Shops, but then decided it was time to begin classes at Central Missouri State Teacher’s College. He took and passed the GED without ever completing any classwork. He later received his Bachelor of Science in Education with a major in Physical Education, a Masters of Education in Elementary School Education, and a Specialist Degree in Physical Education all from Central Missouri State University. He received his Doctorate of Education from Oklahoma State University.

In 1970 Mr. Donath was contacted by the CMSU Physical Education Department chairman asking him to join the teaching staff as an assistant profession. From 1970 to 1986 he supervised and observed Physical Education students in their student teacher experience.

The Donath’s considered square dancing their hobby and shared their talents with many by providing lessons throughout Mid-Missouri. In 1993, Mr. Donath was inducted into the Missouri Federation of Caller and Cuers Hall of Fame for 46 years of calling and 41 years of cuering.